What Valid Work Experience Could You Get at Tesco's?

Well that was a surprise.

I have been Tweeting Tesco's about the Job for No Pay scandal that is currently engulfing them. On Friday Tesco's advertised a job at jobcentreplus for a full time night shift with pay of JSA + expenses (it turns out the expenses were likely to stretch to a Bus Fare). Tescos have since been pushing the line that this was an IT mistake.

Saturday night I became aware via Twitter of ANOTHER IT error where Tesco's were advertising another job for JSA plus expenses. Does lightning strike twice in the same place!

I Twitted (or should that be Twatted!) Tescos with the evidence (see screen shot below). 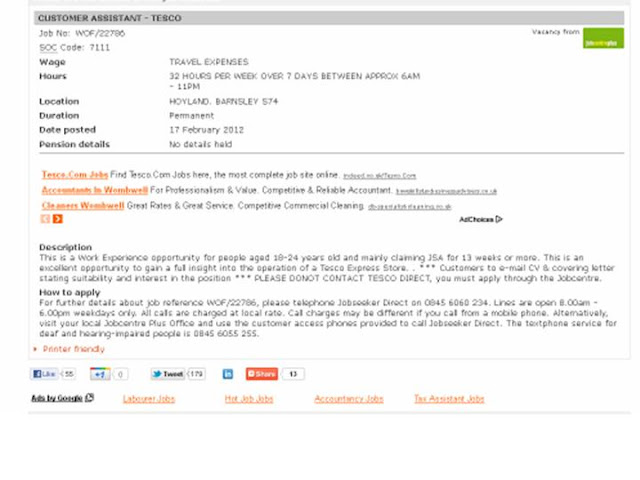 This obviously had an effect on Tesco's who considered this evidence overwhelming and in a momentary act of remorse and mea culpa, ReTweeted my Tweet to its 14,469 followers.

So to recap, Tesco's are offering a permanent Work Experience placement, 32 hours per week over 7 days  between 6am and 11pm for remuneration of a Bus fare (Do buses run past 11pm every night of the week in Barnsley?) and they forwarded the evidence of this to their 14,469 followers.

Does Tesco's incompetence stop there I hear you ask? It must do. If they were totally clueless then what would be the point of a work experience placement learning how they do things.

Well...............I am quite new to Twitter and my skills are nothing more than just competent. Try as I might, I cannot find the re-tweet on my account. How do I know it actually happened? Perhaps the e-mail above was sent in error? Tesco's would like that wouldn't they?

I may not be able to find the ReTweet on Twitter but there are Tweets to me from people completely new to me, "lol" ing at Tesco's for reTweeting my Tweet. (Thanks to Artymum70, Plon71 and leebbUK for confirming my sanity).

So what did this Blue Chip Market leader who believe it is competent to take on unemployed and severely disabled people and give them meaningful work experience within its organisation do?

It appears to me they deleted the ReTweet and hoped I wouldn't notice.

If  you were unemployed, desperate for a career and wanted to succeed would you want to associate yourself with a Company that is happy to present such an apparently incompetent view of itself to the public?
Posted by Edwin Mandella at 18:07

Email ThisBlogThis!Share to TwitterShare to FacebookShare to Pinterest
Labels: are, Crap, Tescos

Edwin Mandella
A 40 something survivor of a bad car crash and severe head injury in 1991. Despite suffering horrific injuries went on to qualify as a Chartered Management Accountant and work for BG, PwC, Fritolay, FM Global and as CFO to Oasis International Leasing PJSC, a $Billion Aircraft Leasing business. In and out of work as a hobby!!